by KMW News
in Kashmir
Reading Time: 2 mins read
A A
0 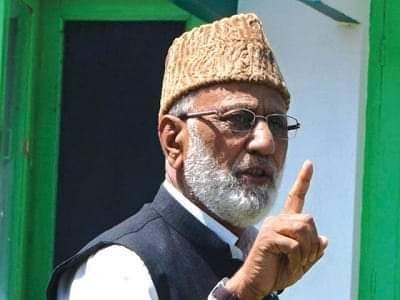 Srinagar, May 05: Tehreek-e-Hurriyat chairperson Muhammad Ashraf Sehrai passed away at GMC hospital Jammu where he was admitted after his health deteriorated in Jail.
Oxygen level of Ashraf Sehrai had decreased to 65 this morning. RAT test for covid was negative, result for RTPCR is awaited.
He was one of the legendary figures of Kashmir profreedom movement , last Year he lost his son in Gunbattle .
It is worth mentioning here that Tehreek-e-Hurriyat chairman, Mohammad Ashraf Sehrai who was facing detention under Public safety Act (PSA) passed away after a brief illness at GMC in Jammu.

Sehrai who was admitted at GMC in Jammu on yesterday after his health started deteriorating at Kot Bhalwal jail, where was facing detention under Public Safety Act (PSA) passed away this afternoon, his son Muhajid Sehrai confirmed.

Sehrai was born in 1944 in Tekipora village of Lolab Valley in Kupwara district of Jammu and Kashmir. Sehrai completed his primary education in his hometown Tekipora and secondary education from Sogam Lolab High School in 1959. After clearing secondary examination, he moved to Uttar Pradesh where he did Bachelor of Arts (Hons) in Urdu from Aligarh Muslim University.

Sehrai became an affiliate of Syed Ali Shah Geelani in 1959 after being encouraged to do so by his elder brother. He has stated that he officially became a member as a “rukun” of Jamaat-e-Islami in 1960. Sehrai was jailed for the first time in 1965 over anti-government activities.

In July 2020 separatist leader Ashraf Sehrai was arrested from his residence in Srinagar by the Jammu and Kashmir (J&K) Police and was lodged at Udhampur Jail.
Ashraf Sehrai was elected as the chairman of Tehreek-e-Hurriyat, a constituent of All Parties Hurriyat Conference, which was previously headed by Syed Ali Shah Geelani