by KMW News
in Featured, World
Reading Time: 1 min read
A A
0 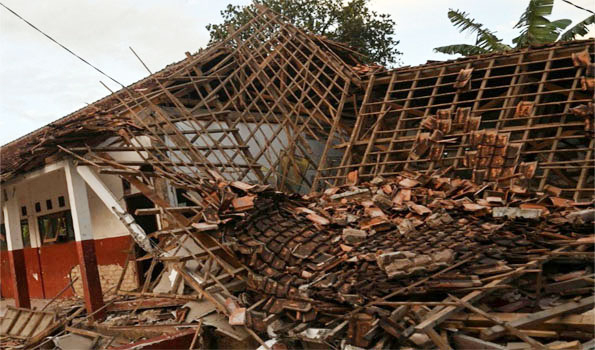 Jakarta, Nov 21  An earthquake on Monday struck the main Indonesian island of Java, leaving more than 40 people dead and hundreds injured, say officials.
The 5.6 magnitude quake struck Cianjur town in West Java, at a shallow depth of 10 km (6 miles), according to US Geological Survey data, BBC reported.
The tremor could be felt in the capital Jakarta about 100 km away, where people in high-rise buildings were evacuated.
Officials warn of possible aftershocks and say the death toll could rise.
The area where the quake struck is densely populated and prone to landslides, with poorly-built houses. Rescuers have been trying to evacuate people from collapsed buildings, and managed to save a woman and her baby, according to local reports.
Herman Suherman, the head of administration in Cianjur town, told local media at least 46 people had been killed, the BBC reported.
“Victims kept coming from many areas. Around 700 people were injured,” he told Kompas TV.
Videos on social media showed the destruction to houses and shops.
Dozens of building had been damaged in Cianjur region, the National Disaster Mitigation Agency said in a statement. They include a hospital and an Islamic boarding school.
In Jakarta, office workers rushed out of buildings in the civic and business district during the tremor, which lasted for about a minute.
Earthquakes are common in Indonesia which sits on the “ring of fire” area of tectonic activity in the Pacific. The country has a history of devastating earthquakes and tsunamis, with more than 2,000 killed in a 2018 Sulawesi quake.