by KMW News
in Featured, Kashmir
Reading Time: 2 mins read
A A
0 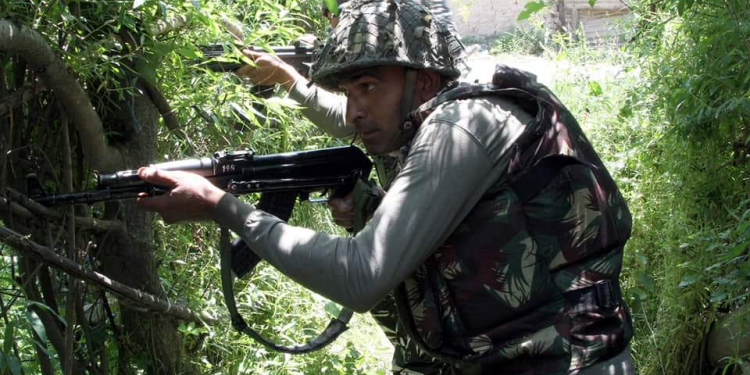 Srinagar, 21 August: Three militants of Jaish-e-Mohammad (JeM) outfit were killed by  forces in an encounter in the upper reaches of forest area of Nagbaeran Tral of South Kashmir.

According to police, the encounter started after a joint operation was carried out by security forces in the upper reaches of Nagbaeran Tral. While the searches were being carried out, a contact was established with the holed up militants, which resulted in the encounter between the two sides.

Later, after an hour, police said that three unidentified militants of JeM have been killed in the operation. Among the slain one was identified as Wakeel Shah, who, as per IGP-K, was involved in the killing of BJP leader Rakesh Pandita and SPO.

The encounter came after the one fought yesterday in South Kashmir’s Awantipora area in which two militants of Hizbul Mujahideen were killed.

However, after the Tral encounter, a press conference was held at Army’s Victor Force headquarters at Awantipora during which IGP, while replying to a question from a reporter, said that they have upgraded their intelligence both human and technical to look out any infiltration bid from foreign militants including Taliban.

IGP said that the police, army and other forces would handle the challenge professionally if anything of this sort happens.

During the press conference GoC Victor Force, Rashim Bali, said that they had received inputs about the presence of militants in Tarsar Marsar forest area and accordingly a search operation was carried out to hunt down the militants. He said that today the contact was established with the militants and all the trio were killed in the gunfight.

Bali further said that the militants taking shelter in the forests would be found and killed.